Call On All The Help & Support You Need For Your Permanent Makeup Business Even If You Didn’t Initially Train With Katy! …

Plus You Will Also Receive A Full Copy of “Top Secrets & Tips To Becoming A Confident Permanent Makeup Artist In The Next 90 Days or Less” Manual.

Why Are So Many Permanent Makeup Technicians Signing Up For ‘Ask The Expert’ – Unlimited Support Package?

So is it hardly surprising that many permanent makeup technicians are left feeling cast out in the cold with no one to turn to. This would effect the confidence of even the most ambitious new recruit and can bring what you thought would be a promising new career to an earth shattering holt!!

But It Doesn’t Have To Be That Way!… 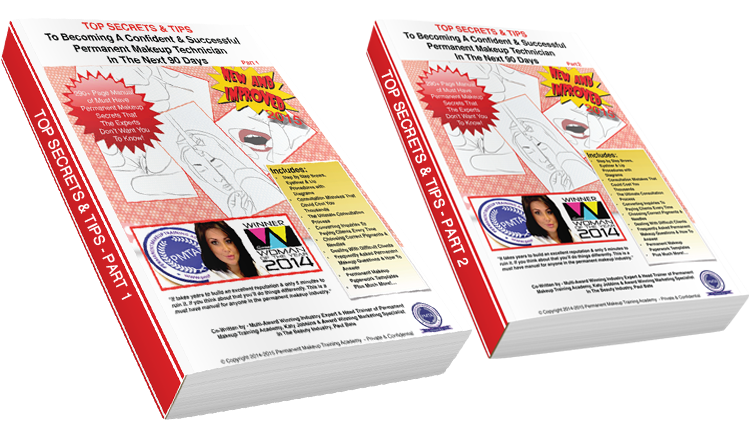 In This 294 Page double volume manual you will get a full feast of real life close up examples, useful illustrations, step by step instructions & business templates to follow.

As a result, this will help you to perfect your techniques and you will be provided with immediate action plans of how to practice proven and tested formulas for producing amazing permanent makeup procedures and the ability to fully perform Eyebrows, Lips & Eyeliner procedures with confidence.

And this can be achieved no matter what machine, pigment or previous training you have received!!

Although it’s powerful to have a set of rules and guidelines to follow, like most of our students, you will find that with our specific step-by-step easy to follow examples, getting these simple procedures perfect will all make complete sense to you.

Also by having access to your own personal mentor to answer any queries or questions will give you the full support you need to gain in both skills and confidence leading to more clients and higher fee’s.

Its no secret that UK based Katy Jobbins is one of the youngest Permanent Makeup Master Trainers in the world.  However this has not stopped her scooping a large number of national awards including the Award for ‘Innovation in Training’ at the 2012 Business Matters Awards, the 2010 Creme de la Creme award for ‘Outstanding Achievement in Her Field of Business‘, previously won by billionaire Sir Richard Branson & the 2009 Award for ‘Best Customer Focus’ at the National Best Business Awards.

In 2013 her training company was also shortlisted for ‘Best Education & Training Centre’ & she was personally shortlisted as a judges favorite for ‘Business Personality of the Year.’

Katy is also an Author & the resident permanent makeup expert on the Advice panel for top industry magazine ‘Salon Today’ & in 2013 was quoted in the Guild News as a ‘YouTube Training Sensation’.

Here Are Just A Few More Quick Facts About Katy:

A Personal Note From Katy…

Why is Katy Willing To Help Other Students Who Haven’t Personally Trained With Her … Giving Away all Her Permanent Makeup Secrets???

Quite frankly she feels pain when well intending permanent make up artists continue to perform inadequate procedures on their poor clients just because they didn’t know any better and could not find access to the training they need. (She knows, because, she used to be one of these technicians!)


If you want in-depth, rock solid information as well as tips, tricks, trade secrets, tried and tested techniques and formulas that will make your clients line up and practically beg you for Permanent Makeup appointments then you have come to the right place!!!

Katy has had her own personal problems within the permanent makeup industry, having a backlash from other trainers, having achieved a lot of success at such a young age in a relatively short period of time.

She was devastated when she was banned from training any further from 2 major training companies as well as one of her own personal permanent makeup hero’s in the UK, due to them not wanting to share their secrets or trainings anymore with her after she created her own successful training academy.  Although flattering that they saw her and her The Permanent Makeup Training Academy as such a threat to their business, it inadvertently turned out to be one of the best things that could have happened to her.

Because of these problems, Katy had to go further afield, finding the best individual technicians that would not know her or see her as a competitor to their business for the level of training she desired.


Now We Are Going To Share With You Her Personal Goal…

…to go against the grain & blow the lid of this very secretive & competitive industry, by sharing with you every thing she has learned about Permanent Makeup so that this never happens to you, no matter where you originally trained or where you intend to take your career.

She also welcomes any other trainers (including the ones that banned her) to join this programme, to show that there are no hard feelings!

We have a ‘Knowledge is Ours to Share, Not to Keep‘ Philosophy

In Fact, You Will Be Running Rings Around Them !!!

And NONE of this stuff is taught as in depth at any other permanent makeup training school.

Even if you are already the best permanent make up artist in the world then I advise you still to get your pencil, note pad and highlighter pen out and absorb these points like a thirsty sponge!!!


You are going to get access to information and mentoring support in a systematic way, which you can put into practice immediately to insure the response from your clients becomes as predictable to you as the sun that rises everyday

So, Just How Much Is This Unlimited Mentoring And Access To Highly Guarded Permanent Makeup Secrets Going To Cost? …

Well when you consider it would normally cost you £1250 just to spend 1/2 a day with Katy for a one off advanced training consultation. And it costs over £8000 to attend her permanent makeup start-up training course, or £2500 to attend the Academy’s own unique 3 Day Business & Marketing Master Class workshop!

Then I’m sure you would agree that £1000 per month would sound very reasonable to get unlimited direct access to mentoring from Katy along with all the secrets in the Top Secrets And Tips Manual.

However, as you will have read above, Katy is keen to share her wealth of knowledge with those dedicated permanent makeup technicians that want to learn from the best of the best.

Therefore, Katy has said that this service has to be affordable to any level of technician from those just starting out to those who have been in battling in the trenches for years.

Just £397 per month for a minimum of six months.

(equivalent of you performing just one extra treatment per month!!)

After subscription you will be taken direct to the members area where you can instantly download the Top Secrets & Tips Manual straight away.

Katy will also arrange to have a welcome chat with you.

There is a reason why some permanent make up technicians do much much better than others….

They do things differently….

AND THEN… after all the above they have the knowledge, skill and technical ability to perform these techniques and desired outcomes above and beyond the expectations of their ever demanding clients

I’m going to hold your hand and tell you how you can too.

Whilst Katy would like to provide this mentoring service to all that need it, there is a finite number of technicians that Katy can take on and support properly. Whilst the PayPal button appears on this page then you can sign-up. But don’t think about it too long as it will be taken away once the limit is reached.

If you think you can do without this mentoring package, then you are right you can!

However, Katy has personally spent over £100,000 in her permanent makeup education to be able to teach you the secrets of perfect Permanent Makeup.

This mentoring program is designed to quickly increase your skill level and cut years off your learning time. However if you truly want to master the art of creating perfect brows, and being one of the most in-demand pm techs in your area, then this program is designed for exactly that.

Given all the new techniques you will quickly learn both in treatment skill and business skill you will have so many more clients that the monthly price of this program will see like pocket change.

Your clients wont continue to accept average treatments and neither should you. To become the best you need to learn from the best…

P.S. Never be on your own again. You are just one step away from producing the permanent makeup that you know you are capable of & always dreamed of.

P.P.S. Limit your touch-ups, eliminate your client complaints & remember my personal philosophy is that the more you learn.. the more you earn.

After subscription you will be taken direct to the members area where you can instantly download the Top Secrets & Tips Manual straight away.

Katy will also arrange to have a welcome chat with you.