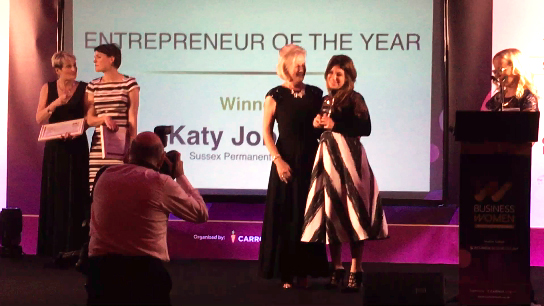 Congratulations to Katy Jobbins – Founder & Head Trainer at the Permanent Makeup Training Academy & Owner of Sussex Permanent Makeup, who is named Sussex ‘Entrepreneur of the Year’ for 2016.

Katy was initially put forward for the award by Woman Entrepreneur Penina Shepherd (left), founder and MD of Acumen Business Law and author of the best selling business book – The Freedom Revolution.

The Women in Business Awards recognise the amazing business women based in Sussex and celebrate the success of today’s very best females in Business. The Semi-Final cocktail event, previously held in September, was attended by over 300 original nominees for the awards. On this night the awards organisers reduced the ‘Entrepreneur of the Year’ category down to the remaining 6 finalists.

It was at the glamorous black tie evening held on 25th November 2016 at the Hilton Metropole Hotel in Brighton, that none other than our own Katy Jobbins was awarded with the NatWest Bank Sponsored ‘Entrepreneur of the Year’ award for 2016.

‘Entrepreneur of the Year’ Award for 2016 was Sponsored by NatWest Bank.

Watch the 2 Minute Highlights of the Business Women Excellence Awards with the Official Video of the Awards Night Below.

This award success follows a number of other high profile awards that both Katy and her Permanent Makeup Training Academy have won over the past 4 years. Amongst others, her Permanent Makeup Training Academy won the ‘Innovation in Business’ Award at the 2012 Business Matters Awards. Then in 2013 she was named ‘Woman of the Year for the Hair & Beauty Industry’ at the 2013 Sussex Woman of the Year Awards hosted by Olympic Gold Medalist, Sally Gunnel.

The Moment they Announced Katy as the Entrepreneur of the Year

Watch the following Presentation Video from the Awards Ceremony …

More recently, Katy won the ‘Training Centre of Excellence‘ Award at the glamorous 2016 etc. Magazine Hair & Beauty Awards. In the past she had also been shortlisted for 2 ‘Lifetime Achievement’ awards even though she only recently turned 30 years old!

Although speechless on the stage when accepting this latest award (and thinking she was actually a runner up, as you can see from the above video!) after time to reflect on this latest award success, Katy said:

“Being named ‘Sussex Entrepreneur of the Year’ after seeing the long list of other successful female business women came as a huge shock to me. To say I was lost for words is an understatement, however I am so proud of the testimonials my students have given which show the support and dedication I have given to each and every one of them.

I love nothing more than helping them set up their own businesses in this thriving industry and seeing the life-changing results they consistently achieve both financially and emotionally. It proves that my philosophy of the more you give the more you get back yourself is true!”

“Deliver more than you are getting paid to do. The victory of success will be half won when you learn the secret of putting out more than is expected in all that you do.”

Why not consider a career in permanent makeup yourself…

If you would like to find out how to train 1 to 1 with Katy and start a career in permanent makeup, make sure you download the latest course prospectus (which includes prices and location options etc.) by inputting your name and email address in the form below.

Discover How To Start a New Career In Permanent Makeup

Download the Latest Permanent Makeup
Training Package Options Now & Train 1 on 1
With Head Trainer & 2019 Mentor of the Year, Katy Jobbins
Simply Enter your name and email in the boxes below and press the download now button... You will receive a confirmation email first. If you don't find it in your inbox then please check you spam folder.

Our Permanent Makeup Start-up Course is Voted the UK’s Health And Beauty Programme of the Year
July 13, 2015

Why Katy Jobbins is a Beacon for Success in the Permanent Makeup Industry
January 30, 2015

Why Is Katy Jobbins Trending On The Chichester Observer Website?
December 18, 2014

Katy Jobbins 2014 Award Winner for Woman of the Year
December 4, 2014
Find Out Everything You Need To Know About Permanent Makeup Treatments
Go to Top